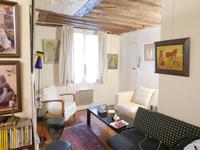 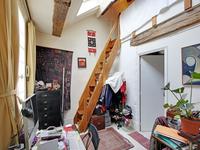 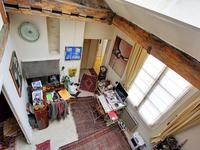 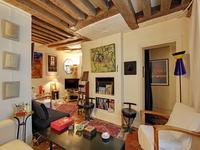 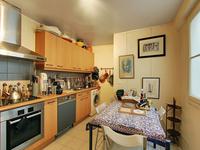 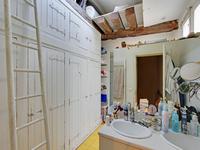 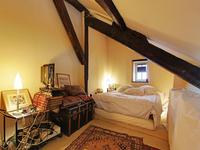 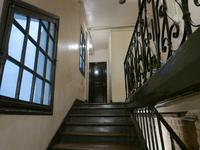 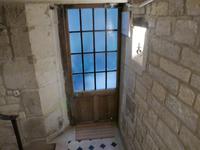 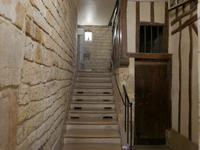 Paris 6th - 75006 - In the heart of St-Germain, superb Duplex - 2 bedroom apartment of 77 sqm, at the 3rd and 4th floor, providing confort, charm, and quietness at walking distance from Odeon, Bucci street, within this mythical and bubbling neighborhood with the most prestigious luxury boutiques, trendy bars and gourmet restaurants

Paris 75006 - St-Germain - 2-Bedroom - 77sqm - Superb duplex apartment + Mezzanine of 69,46 sqm Carrez / 77sqm at living space, bright, quiet, with nice volumes, oriented west / south and located on the 3rd and 4th floor, on the courtyard of a 17th century building. It is composed by: on the 1st level: a living room with its chimney, beams at the ceiling and vintage floor tiles, a big independent and fully equipped kitchen, and a WC - on the 2nd level: a room with cupboards, a small office corner with its fireplace, a bathroom with bath and shower, a WC and a mezzanine converted into a 2nd bedroom. Two cellars complete this property. Possibility of rent a parking slot nearby within 100m.

Additional information - Two independent entrances on the 3rd and 4th floor could allow to create, if required, a large independent studio at the 3rd floor and a second small studio with mezzanine at the 4th floor. The heating is individual and electric. The service charges are of €210/ month (with cold water included) and land/property taxes are of €794/ year.


Building - Beautiful building of the 17th century, very well maintained and whose staircase is listed in the inventory of Historic Monuments. The entrance is secured by a digital code and an intercom. A full time concierge service is provided. High-speed fiber optic is available. The facades were renovated in 2014, the roof in 2010 and the water pipes in 2016. The common areas have been partly renovated in 2017. The renovation of three small courtyards and part of the staircase remain to be programmed.

Shopping - The shopping environment is very dense and upper class in the 6th arrondissement, it offers many shopping stimulating shopping opportunities. There is the market on Saturday, great boutiques, department stores, cafés, all at walking distance. For exalting shopping you need absolutely to go to the "quartier Latin" and Saint-Germain-des-Prés, "Le Bon Marché" department store, boulevard Saint-Germain, rue du Bac, rue Vaugirard and rue de Rennes, and also the traditional Raspail Bio food market, Place Edgar Quinet and rue de La Gaîté, as well as Montparnasse area were you will also find the famous train station, life and movie theaters…
In fact, Saint-Germain, is in other words, the essence of Parisian shopping. For a shopping spree in the heart of Paris, absolutely not-to-be-missed districts are Saint-Germain-des-Prés, Sèvres-Babylone and rue de Rennes. Haute couture and ready-to-wear: everything is there! On rue de Rennes, there is a line-up of major brands including Etam, H&M, Gap and Kookaï. At the bottom of the road, on boulevard Saint-Germain and in neighbouring streets, the window displays of grand couturiers vie with one another: Giorgio Armani, Sonia Rykiel, Christian Dior, and also Ralph Lauren, A.P.C., Carven, Vicomte A., and finally, for bags, Jérôme Dreyfuss. The designer Karl Lagerfeld has a shop at 194 boulevard Saint Germain. In 2013, the chocolate and sweet maker Meert (originating from Lille), well-known for its inimitable vanilla waffle, has opened a shop in the 6th arrondissement. The first Parisian shop of La Tarte Tropézienne, founded in Saint-Tropez, has also opened on rue Montfaucon. The district also has a variety of brands with shops like Caroll, Havaianas, Ice Watch, and Edward.Edward.

Park - The 6th arrondissement est parsemé de petits squares, mais aussi d'une belle promenade et de jardins, dont en particulier, l'unique et le fameux Jardin du Luxembourg: The 18th arrondissement is sprinkled liberally with gardens: the Deux Nèthes, the Arenes of Montmartre, Eole ... small squares: Louise Michel, Léon Serpollet, Paul Robin, Nadar, Léon, Jehan Rictus, Carpeaux, Marcel Bleustein Blanchet, Suzanne Buisson, ... without forgetting the Parc des Buttes Chaumont nearby and the cemetery of Montmartre which is a haven of peace and change of scenery. The following parks are worth a visit for a walk:
• Jardin du Luxembourg: Situated on the border between Saint-Germain-des-Prés and the Latin Quarter, the Luxembourg Gardens, inspired by the Boboli Gardens in Florence, were created upon the initiative of Queen Marie de Medici in 1612. The gardens, which cover 25 hectares of land, are split into French gardens and English gardens. Between the two, lies a geometric forest and a large pond. There is also an orchard with a variety of old and forgotten apples, an apiary for you to learn about bee-keeping and greenhouses with a collection of breathtaking orchids and a rose garden. The garden has 106 statues spread throughout the park, the monumental Medici fountain, the Orangerie and the Pavillon Davioud. There are many activities and facilities for children such as puppets, rides and slides. Adults, whether they are Parisians or tourists, can play chess, tennis, and bridge or remote control boats. The cultural program is characterized by free photography exhibitions on the garden railings and by concerts in the bandstand.
• Square Bernard- Palissy: This small square of 80 sqm was designed in 2000 on the ruins of the building of number 8 visconti street, collapsed 25 years earlier.
• Square Taras-Shevchenko: Initially the Charity Square which was built in 1937, it was named after the Ukrainian poet Taras-Shevchenko in 1969. This square of 436 sqm adjoins the Ukrainian cathedral Saint-Vladimir-le-Grand.
• Promenade de l'allée du Séminaire: The former Séminaire garden (now Hôtel des Finances) was converted into a 990 sqm public garden in 1936. Facing No. 73 stands the Peace and Arts Fountain, designed under The Empire for the Place Saint-Sulpice and then transplanted to the center of the Saint-Germain market from 1824 to 1935.
• Square Ozanam: Beatified by Pope John Paul II in 1997, Frederic Ozanam founded the Conference of Charity which became that of St. Vincent de Paul. This garden of 1 6540 sqm dedicated to him, and created in 1934 in the extension of the church of Notre-Dame des Champs, is planted with chestnut and maple trees.
• Square Honoré-Champion: Honoré Champion is the founder of the eponymous Parisian publishing house, founded in 1874 and specializing in the study of human sciences. This small heart of greenery of 374 sqm on the banks of the Seine, was created in 1947 and welcomes since 1960 a statue of Voltaire, signed by Léon Drivie.
• Square Gabriel-Pierné: Wink to the nearby Mazarine library, two limestone benches imitate an open book. This square of 644 sqm was created in 1938.
• Square Laurent-Prache: Laurent-Désiré Prache (1856-1919) was a city councilor and deputy of Paris from 1890 to 1910. Near the entrance to this square of 590 sqm created in 1901, the pedestal supports again Dora Maar bust, sculpted by Picasso, inaugurated in 1959, stolen, and then found again in 2002.
• Square Felix-Desruelles: square Saint-Germain-des-Prés of 1 544 sqm, created in 1901, was baptized in 1958 square Félix-Desruelles in homage to the Picard sculptor. To see, the monumental ceramic sandstone made by Jules Coutan in 1900 and placed on the facade of the palace of the "Manufacture de Sèvres" on the Seine border.
• Square Francis Poulenc: This square of 184 sqm created in 1940, faces the "Palais du Luxembourg" whose construction was commissioned by Marie de Médicis in 1615.
• Jardin des explorateurs: Garden of 10 903 sqm, created in 1867 and located on the southern part of the old castle of Vauvert, built by King "Robert le Pieux". The enclosure, reputed to be inhabited by the devil, will be deserted. It will give rise to the expression "envoyer au diable Vauvert".

6th arrondissement - Once the hangout for bohemians and intellectuals, the Saint-Germain-des-Pres district is well known for its beautiful architecture, café culture, trendy boutiques, art galleries and the revolutionary intellectualism and literature it has hosted. This arrondissement has long been home to French intelligentsia and is a major hub for Art galleries and one of the most fashionable districts of Paris as well as its most expensive area. It includes world famous educational institutions such as the Ecole des Beaux-Arts de Paris and the Academie francaise, the French Senate as well as some of Paris most famous monuments including Saint-Germain Abbey, St-Sulpice Church, Le Pont des Arts and Jardins du Luxembourg, dating from the 17th century.