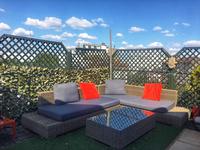 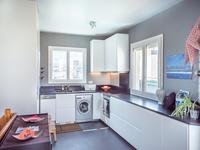 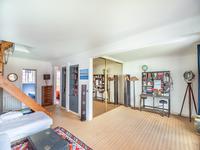 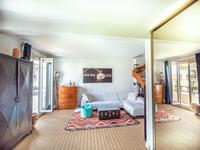 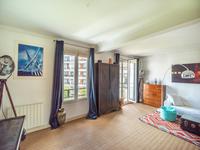 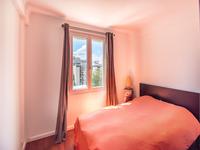 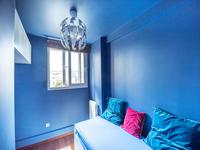 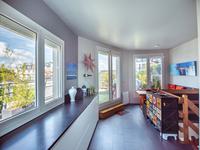 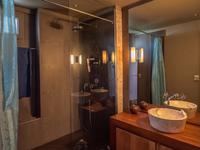 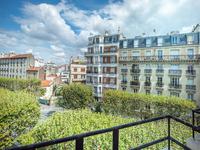 Boulogne-Billancourt 92100 - 4 rooms + alcove - 78 m² + Panoramic terrace 38 m² - See virtual tour 360 and Plan (Video on request) - Top floor and sky views for this duplex flat of 78m ² with its superb terrace of 38m ² and its view of Eiffel Tower. Luminous and without vis-à-vis are the undeniable assets for this flat located in a small co-ownership (10 flats) of 5 floors overlooking a wooded avenue (Garage available in the building (30,000 euros extra). Exceptional, it includes on the 4th floor, a welcoming entrance leading to a spacious living room of 38 m² with a balcony, 1 parent's bedroom, 1 children's bedroom or office (3rd bedroom possible), a beautiful Italian shower room and separate toilet. The 5th and last floor is entirely composed of the dining room with its recent and modern kitchen opening onto a superb terrace ideal for relaxing in the sun, for entertaining or simply an al-fresco aperitif . It is a friendly space ideal for family, friends or telecommuters. Close to the city centre, the Bois de Boulogne, sports areas and nearby shops. Close to line 9 of the Marcel Sembat metro and the cycle track leading to the centre of Paris.

This property is wonderful as a family home, a pied-a-terre close to Paris, or as an investment opportunity for rental (ideal for all the local sporting occasions). Once inside the apartment, the entryway leads immediately to the light and spacious SALON (38.2m²) which boasts two windows and a balcony (1.7m²). The built in storage is a great addition. It would be possible to divide this room to make an attractive third bedroom. Directly to the left of the entrance is a single BEDROOM (5.9m²), and double BEDROOM (9.9m²), separate WC and BATHROOM (4.2m²). Upstairs is the bright, modern KITCHEN DINING (17.7m²) area, bathed in light from its two windows and double doors leading straight onto the stunning TERRACE (37.9m²). Here’s the perfect space for relaxing with the family or entertaining guests, enjoying the sunshine throughout the day and al fresco meals at night with the view of the sparkling Eiffel Tower and beautiful Boulogne sunsets.

Proximity to the metro Marcel Sembat on line 9 makes it ideally placed for the short journey into Paris, and with bus routes and cycle paths nearby, it’s an easy commute. Perfectly situated in Boulogne, with many shops and amenities a short walk away, including the centre commercial de Boulogne, with shops such as Fnac, Monoprix, Zara, Gap, Picard, plus restaurants and a modern cinema complex.

Boulogne Billancourt is a commune on the western edge of Paris. Surrounded by sporting venues and stadiums (notably Roland Garros, Parc de Princes, Stade Francais, Stade Jean Bouin, Hippodrome d’Auteuil…) that will feature in the upcoming Olympic games. Boulogne also offers sporting possibilities on the River Seine, with sailing and rowing clubs. The Bois de Boulogne is the perfect place to unwind and the circuit of its lakes and wooded areas are perfect for running and cycling. Alternatively the stately Parc de Saint Cloud across the river offers wonderful views across Paris and inter-connects through woodland and grand avenues right up to Versailles. Also in Boulogne are the exquisite Jardins Albert Kahn with English, French and Japanese gardens. The espace Landowski provides its vast library, cinema and museum. The most recent and impressive addition to Boulogne is ‘La Seine Musicale’, on the Ile de Seguin, hosting some of France’s most prestigious cultural events in classical music, theatre and musicals, and international pop and rock artists. A museum of contemporary art is also being created on the island. Boulogne's cultural and residential vibrancy is reflected in its array of attractive restaurants and cafés. The existence of the new tramway at the Pont de Saint Cloud and the forthcoming creation of the new Grand Paris line 15 Sud has further increased Boulogne’s development. The Pont de Sevres will be 24 mins from Orly, 15mins from La Défense and 47 mins from Roissy Charles de Gaulle, cutting times by half.