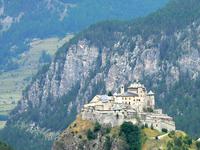 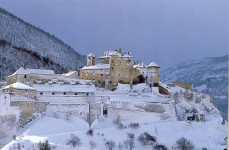 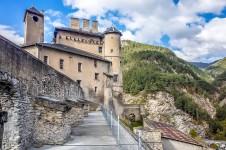 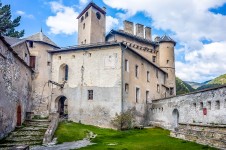 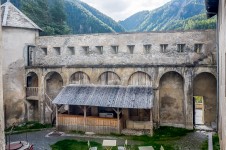 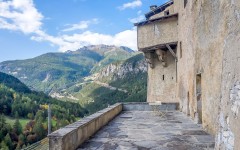 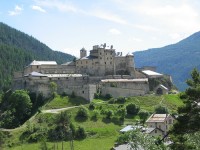 Fort Queyras, a stunning heritage property with documented history, in the heart of The Southern Alps.

The Chateau…
The Fort Queyras first entered history in 1265 AD as a Château attached to the Dauphin (First in line to the throne ). Since then it has been the focal point of many battles and power struggles and has seen countless facelifts and improvements. The building itself sits on a rocky perch above the River Guil, in a commanding position designed to protect the valley from marauders and invaders.
Its imposing walls dominate the valley and command truly wonderful views of the surrounding mountains and forests. The Fort is a collection of buildings within the surrounding ramparts which are accessed via the main draw-bridge entrance. The cobbled lane leads up to the main courtyard and lawned terrace where the owners have their own private residence. This is a stand alone 4 bedroom house which is completely independent of the rest of the chateau. It has a picket fence surrounding the front garden and also has great views of the surrounding landscape.
There are soldiers barracks, store houses, arms depots, a bakery, hospital, and even a chapel, all of which are open to the public from May to September thanks to the generosity of the current owner. It is also host to The Medieval Festival in mid summer when locals and tourists alike dress up in period costumes and celebrate the castle’s glorious history.
The Fort saw major architectural improvements when Vauban came to the region in 1692, improving the defences throughout the whole alpine range and making the fort even more impenetrable. These grand modifications where then to prove important as it became a garrison for the Chasseurs Alpine at the beginning of the second world war.
Later, the Fort became a holiday camp for children in the 1950’s before returning to civilian life in 1967. This unique property is used as a family home, museum, wedding venue and a historic monument to be admired by the general public in the summer months.
It is undoubtedly a fabulous retreat where one can close the main gates and enjoy oneself within the confines of it's protecting ramparts and towers.
LOCATION …
The Area… Fort Queyras is the centre point of the quaint village of Ville Vieille sitting on the River Guil in the Queyras National Park. This region of the Southern Alps has epic natural beauty topped with fabulous history which is crowned by the Fort Queyras itself. The region is hugely popular with white water enthusiasts as the Guil is a very challenging “5” rated river when at full flow. This area is also famous amongst the road biking fraternity as it includes the famous Col d’Izouard made famous by the Tour de France. In winter, the Queyras offers 4 separate ski domains with a total of 250 hectares of piste, all accessible on one pass. The area is known for it’s micro climate which very often brings with it exceptional snow cover that neighbouring ski domains miss out on. This along with it’s un commercialised nature make it a ski paradise for lovers of quiet, untouched forest fun and peaceful pistes. Out of winter season the area is accessible via the Col D’Izoard to the north, over to Briancon and Italy beyond. In winter, one enters the park from Guillestre in the south. The nearest international airport is Marseille at 250 kms ( 3 hours ) and equally Turin in Italy which is just 160 kms ( 3 hours ).