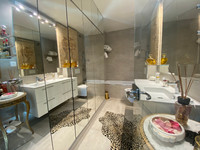 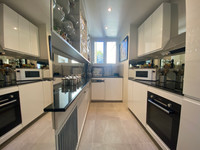 Paris 75005- A character Property, "Turnkey luxury apartment", beautifully renovated in 2020 and just a few steps from the very famous Michelin starred restaurant "La Tour d'Argent".
In a residential building, on the 4th floor with lift, offering panoramic views of the Seine Quays, Pont de la Tournelle, the Ile Saint Louis and the impressive cathedral of Notre Dame de Paris.
Located at 3 Quai de la Tournelle, 390 metres from the Jussieu metro station (line 7), the 6-storey building is a small co ownership with 10 lots, with only 6 flats, one property per floor, and a lift serving each floor privately.
A staircase also provides access to each floor.
Built on a total surface of 281 m2 whose cadastral references are 000 AD 0008.
The building is secured with Vigic, digicode, and a double door entrance for access to the lift.
The common areas are well maintained.
Surface area of the property : Lot n° 17 (150/1000 èmes).
With a total area of 101 m2 Loi Carrez, crossing North and South, the flat has a beautiful light in a large living room of 55.43 m2, thanks to three double glazed windows, changed in 2020.
The panoramic views are exceptional.
With a height ceiling of about 2.60 m, quality parquet floor, the living space consists of a lounge with fireplace, a dining room and an office area.
Nearby is a guest toilet of 1.08m2 with WC and washbasin.
The fully equipped kitchen of 5.52m2, facing south, offers plenty of storage space and black granite worktops.
A long corridor with wardrobes and numerous storage cupboards leads to the bedrooms.
The very quiet and bright south facing master bedroom of 13.31m2 has an en-suite bathroom of 5.59m2 with bathtub/jacuzzi, shower attachment, wash basin, mirrors and WC.
The second bedroom of 9.8m2 also south facing with adjoining shower room of 2.76m2 with Italian shower/hammam, washbasin and mirrors.
This property is fully equipped with central air conditioning.

Miscellaneous : General building common charges, 471 Euros/month including collective gas heating and lift charges.
Property taxes 1462 Euros.
A parking space on a long lease until 2033 at 12 Rue de Pontoise Paris 5 is also included in the sale of this property. The monthly charges for the parking space are 65,61 Euros.
Located in a privileged area in the heart of Paris, all shops and restaurants are nearby.

Near :
5th Arrondissement - The historic heart of the Latin Quarter has been a centre of scholarship and intellectual achievement for centuries and takes its name from the Sorbonne, where Latin was the common tongue for all students during the Middle Ages. This arrondissement is one of the oldest districts of the city where traces of the area's past survive in such sites as the Arènes de Lutèce, a Roman amphitheatre, and the Thermes de Cluny, a Roman thermae. It remains a major draw card thanks to sights such as the Pantheon, the Sorbonne University, the botanical gardens known as the Jardin des Plantes. The neighbourhood has the feel of a small village and students mix freely with professionals in its winding streets. The market street of Rue Mouffetard is a primary artery where shops, international restaurants, bars and cafes are found.