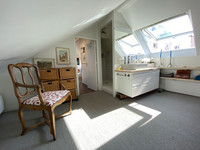 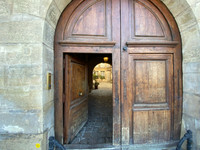 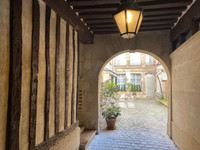 PARIS 75004 - Ile Saint Louis/ Quartier Notre Dame - In the heart of the Ile Saint Louis, Duplex of 89m2, One bedroom property - Carrez law 71,5m2, crossing North/South, on the 3rd and 4th last floor. In historical building from 17th century, with small co-ownership of 15 units, this property is located on the courtyard side, very bright and quiet, with beautiful volumes. It comprises an entrance, a large main room of 40m2 with a lounge /fireplace and a dining area, a semi-open fitted kitchen and bathroom. A staircase leading up to the floor gives access to an office area, an alcove boudoir, and bedroom bathed in natural daylight with an adjoining shower room and separate toilet. A vaulted cellar of 15m2 completes this property. In historic Paris, this property of character is close to all the shops, terraces, and Seine River banks with trees.

Miscellaneous :
Duplex, One bedroom property with a total surface of 89m2, Loi Carrez 71m2. Lot n°16 (Freehold : 920/10000) and Cellar n°28 (Freehold : 38 /10000).
Property taxes: 978 Euros. Monthly charges: 130 Euros. Individual electric heating.
HistoricaL edifice composed of 3 buildings, co-ownership of 15 apartments, secured (Vigic + digicode), with well maintained common areas.
The building is erected on a 264m2 plot, it is 240 meters from the metro station "Pont-Marie" (L7).
At the end of this quiet courtyard, a period stairway, listed by the French Historic Monument Society, leads to the various floors in the building.
The property on two levels is located on the courtyard side, 3rd and 4th floor, very quiet.
It has a North/South exposure and bathed in natural light.
The reception room of 40 m2 comprising the living room with fireplace and a dining area, offers beautiful volumes, a parquet floor, exposed beams, and several windows with casement and espagnolettes.
The separate kitchen, 6 m2 , with window, is fully equipped and open on the dining area.
On the opposite side, the bathroom with bathtub, which was originally a kitchen, is lit by a window. The room can also be used as a linen room or dressing room.
The staircase then leads to the duplex floor, which is entirely covered with terracotta tiles.
The first room has been converted into a study. Opposite, under a skylight, a boudoir-like alcove leads to the separate bedroom.
The bedroom , 12m2 , is adjoined by a semi-open shower room with a sloping ceiling and natural lighting. Separate WC on the first floor. A beautiful vaulted cellar of 15m2 completes this property.

Near: Notre Dame, Louvre Museum, Opera Bastille, Place des Vosges, Marais District, Pompidou Center, Museum of Natural History, Carnavalet Museum, Picasso Museum, weekly market of the Bastille. Saint-Louis is, with the Ile de la Cité, one of the two natural islands of the Seine present today in Paris. Its name dates from 1725 and comes from King Louis IX nicknamed Saint Louis. Legend has it that the king used to isolate himself and come to pray on the Isle of Cows which was at the time on the eastern part of the island today. It is a small jewel of architecture that perfectly embodies a certain French way of life and represents the image of the city of light. It is a prestigious address especially with the many mansions of the seventeenth and eighteenth centuries. Connected to the rest of Paris by six bridges, Île Saint-Louis is nonetheless a very peaceful place, sheltered from the noise and the surrounding bustle. Behind the anonymous intercoms, reside political and media personalities. Very much, the neighborhood even hosted President Georges Pompidou (24, Quai de Bethune). It is crossed by its main street, St. Louis Street in the Island, and we go around by the docks.